January 29th
​​Premiere of "Songs of Despair" with Heiða Árnadóttir, soprano and Tinna Þorsteinsdóttir, piano at Dark Music Days in Reykjavik, Iceland.
You can find more info here
9 - 13th of February
Performing on the 11th of february in Øland by Marble Crowd at IceHot in Helsinki, Finland
more info here
March
Composing the music and soundscape for a new theatre piece called "Þoka/Mjørka" by Aðalbjörg Árnadóttir
more info 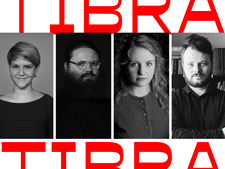 11th of May
Premiere of "Senza di te" for Siggi String Quartet in Salurinn, Kópavogi in Iceland
The concert will be streaming in addition to being live
You can buy tickets here

17th of November
Hljóðstemmningar with Anrijs Ivanovskis in Mengi, Reykjavik
1st of October
Accelerated and made significant will be performed by Tinna Þorsteinsdóttir at the Nordic Music Days
​http://www.nordicmusicdays.org/tinna-thorsteinsdttir 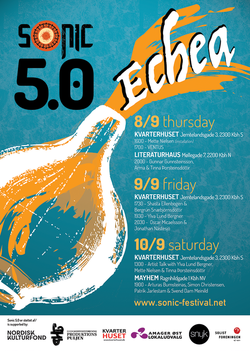 8th - 10th of September
Sonic 5.0 - Echea
Accelerated and made significant will be performed by Tinna Þorsteinsdóttir 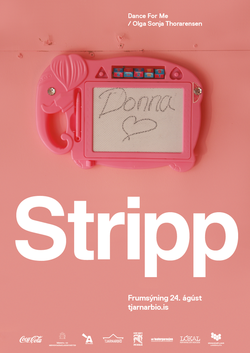 24th of August
Premiere of Stripp by Dance for me and Olga Sonja
https://midi.is/leikhus/1/9712/STRIPP
20th - 27th of may
Performing with 16 lovers at the Nordic Performing Days in Torshavn, Fareo Islands
5th of may
Fengjastrútur will premiere Followings nr. 5 in Mengi, Reykjavik
30th of January
My installation/concert experience Pansonicon 1 will be an ongoing event for the duration of the day at Dark Music Days
​More info
29th of January
Premiere at Dark Music Days in Reykjavik, Iceland of a tuba concerto which Nimrod Ron, principal tuba of the Icelandic Symphony Orchestra commissioned.
The Icelandic ensemble Caput will perform the piece with him.
​More info

8th of december
Fragments of a forgotten land for Bassoon and chamber ensemble premiered in Copenhagen by Anrijs Ivanovskis
INFO
3 December
Sonic 4.0 - Static Illusions
31st of october
Colours of the wind for 2 soprano saxophones premiered by Michaela Stapleton and Esneider Valencia in Medellin, Colombia
7th of October
Flæði VIII for percussion and 2-3 other instruments premiered in Aalborg Denmark. Commissioned by Ny Musik.
22 May
Performed at Raflost electronic festival in Reykjavik Iceland.
April - May
Resident writer at the Independent theater in Reykjvik (Tjarnarbio.is).
Mainly worked on Iður, a music theater for one person and electronics/playback.
7 March
16 elskendur premiered Minnisvarði at Tjarnarbíó, Reykjavík. 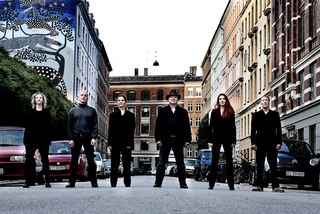 From the premiere of "Kvinden og Dissonancen" on the 28th of November 2014 written for Figura http://figura.dk
Poem by Ursula Andkjær Olsen, Music by Gunnar Karel Másson 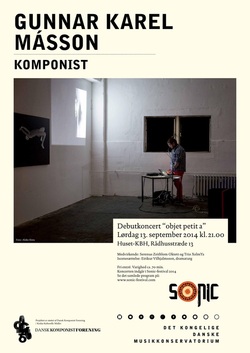 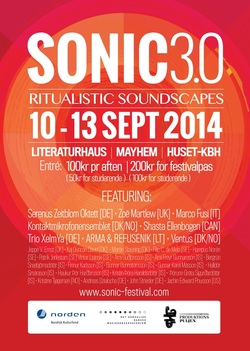 10 - 13 September
Sonic 3.0 will take place in Copenhagen, and will host my Debut from the post-graduate studies from the Royal Conservatory in Copenhagen. The concept piece "Situation and Physicality in Music" will be premiered there.
2-3 August
The Improvised History of The World at the tete-á-tete in London.
I was one of 3 composers to composed the music for the show.
13 - 14 June
Performed Makhana at Quiet Violence in Berlin, DE.
21 May
Makhana for cello and electronics premiered by Zoe Martlew in Reykjavik. 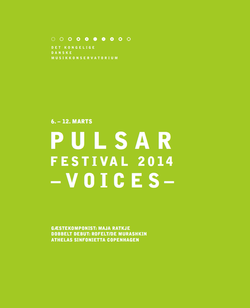 16 - 19 October
Premiere of a new piece for toy piano in Reykjavik, Iceland by Tinna Þorsteinsóttir at the music festival Slaturtid
There you will also see a new piece by me performed by the avant garde ensemble Fengjastrutur.

18th of October
UK premier of my piece I am watching me watching you watching me for violin and cello. Performed by Aisha Orazbayeva on violin and Lucy Railton on violoncello. More info here 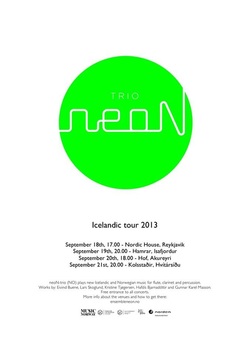 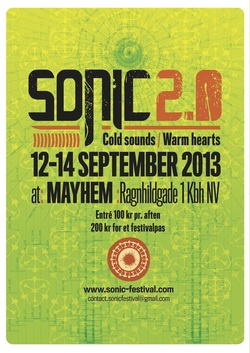 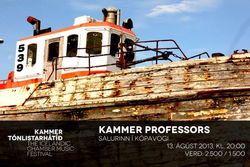 7 - 17 August
"Stilla Nr. 1" for Violin, Violoncello and Flute will be premiered at the Icelandic Chamber Festival 13th of august 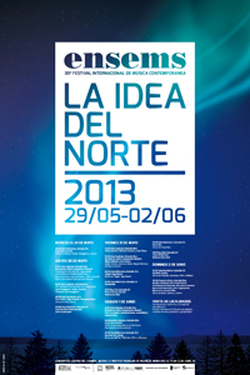 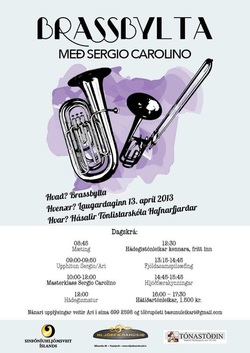 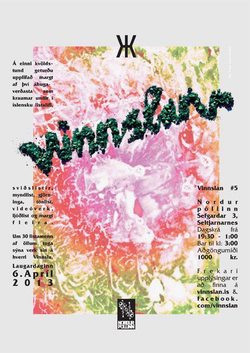 6 april
Will be performing at Vinnslan #5 with Árni Guðjónsson
We will be psychoanalysing the audience with the help of Lacanian theory and synthesizers !
13 March
Duplex for solo bassoon performed at the Pulsar festival in Copenhagen

Aug.
One of seven Icelandic composers chosen to participate at the Ung Nordisk Musik festival which will be held in Iceland this year.

June 13 - 16
Sonic festival sees the premiere of my Pansonicon 1 [Beta] in Frederiksberg DK.

May 22
Workshop with the TM+ ensemble.

May 7 - 10
Workshop with the Esbjerg ensemble. Culminating with a concert where "Aldirnar Fjórar" will be premiered.

Mar. 3
Premiere of the performance piece "Sýning Ársins" by 16lovers, where I am in charge of the sound and music.

Jan. 27
Participating in a workshop with the Icelandic Symphony Orchestra